Pain
Our gentle old man is gone. We had to say goodbye to Zeke on Tuesday night, after his condition worsened pretty quickly. He was diagnosed w/a cancerous tumor in his jaw about 3 months ago, and had it removed. It took about a week after his surgery to return to his old self, then we noticed the bulge starting to re-appear again about 2 weeks ago, the cancer had come back & spread.


Upgrades
Now for some more upbeat news, I got another toy.

After dealing w/ a 2010 Marzocchi Bomber TST44, I stepped up to something modern. The 32mm stanchions on the Zocchi weren't nearly enough to handle my 240# when the going got tough. I could feel the flex at times, and often feared the day when it would just snap on a big hit, catapulting me over the bars, as I did around 1978 on my old Schwinn.

We had set up a jump in the side yard of my folks' house, and would barrel down the hill from the neighbor's house to hit it. I rolled down at top speed on one of my runs & launched it. When the bike & I got airborne, I noticed that the front wheel didn't. Not having the sense of bike maintenance in my youth, I had overlooked checking that the wheel was locked in place. So, there I was, sailing through the air & watching the front wheel roll away in front of me - 'uh-oh', I thought. As you can imagine, when the fork impaled itself into the yard, the bike came to an instant halt. On the other hand, my forward momentum didn't. I remember landing on my chin & chest pretty good, but lucking out with no injuries, other than my friend Jeff standing there laughing at the carnage.

The Pike has 35mm stanchions, & a tapered headtube, both of which should make for a much stiffer front end. Another plus was, instead of only having a rebound adjustment, I now have compression as well. More adjustments is good, but as figuring them out....    Got it installed within an hour of receiving it & was jonesing to ride it, but had a lengthy ride planned for the following day, so would have to wait because April 5th was the Anti Epic Gravel Grinder ride in Monument.


Minor Pain
Steve, Hirsch & I loaded up late morning & rolled down to rendezvous w/Joe & all the others who were rolling out that day. Even though Steve lent me his Chinese carbon MTB, this was still a tough ride - just 50 miles w/3,600' of climbing. The terrain rolled up & down through the open fields heading east from Monument, then came back after reaching the town of Elbert.

Steve dropped back pretty quickly, and I continued rolling on, watching Joe & Hirsch slowly disappear in the distance. I stopped a few times, but never saw Steve, then ran into Hirsch at the 1/2-way point in Elbert. We starting heading out of town, when we saw Joe waiting for us, so decided it was time for a break. We then rolled most of the way back together, with me falling behind as I was slowly crumbling.

Finally, about 5 hrs 30 minutes later we rolled back in Pike's Peak brewing just in time for the raffles going on. This is when I found out that Steve had only made it out of the gate before having to turn around b/c of his non-pedaling legs....bummer! But, as he said, that was a good decision to make today, or else he'd be crumpled up somewhere out along a dirt road w/the keys to his sag vehicle tucked in his pocket. As for me, one & done. Did the ride, but have no interest in doing that again - lots of pedaling w/no real payoff. Other than the aspect of having good friends along for a ride (a huge motivation plus), I would have hated it...just a long sufferfest in my book.

The next morning, I hopped on the bike to do some errands & realized just how badly my taint was feeling from the previous day. Had to stand almost the entire 10 miles I did running errands. OK, no bikes for a few more days for my butt!


Recovery
After a very tough beginning to the week, I desperately needed to get out & do some fun riding, as well as test out the new fork. For an initial test, I wanted something somewhat smooth, but with some minor chunk, so headed to Golden to pedal up Chimney, then bomb my way back down. The week before I did the same ride about the same time & saw only about 5 people on the trail, but today was 75 degrees, so things would be much different. I saw a group of about 8 bikes heading up as I rolled into town, as well as a few hikers.

Started heading up & felt pretty good - pedaled through several sections where I usually am off pushing the bike. Ran into besoft just before Windy Saddle & learned that the bi group was the GBS/Niner lunch rides they were doing, so hopped in w/those guys.

I started the ride w/the recommended settings (95+ psi, 4C/4R) and didn't get as much travel as expected, but since Chimney Gulch is pretty smooth, that may not have been the best test. I dropped the pressure 5 psi & went straight over to do a quick lap of Dakota Ridge (which has a rock or 2). The fork felt good, but still didn't have that 'butter' feel to it.

Next day: let's lower the pressure to 80psi & head to Deer Creek - I would be able to get some fast stuff, along with some good rocky sections there. It did feel pretty good, but not blowing me away yet. I did notice quite a difference from the 4-yr old Bomber - I wasn't even hammering & still beat all my previous times, so something was working right. 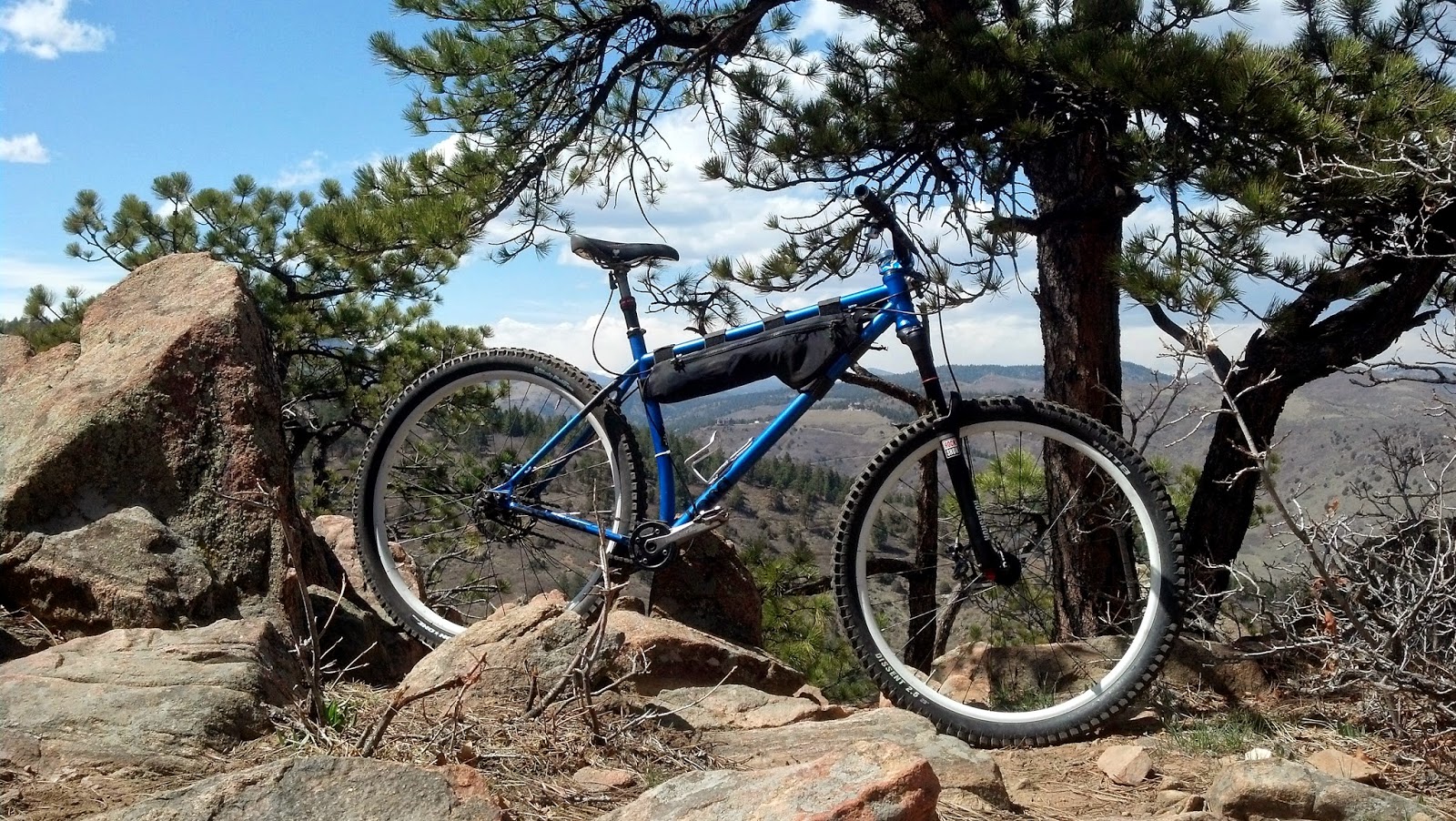 Yesterday: I again lowered the pressure & tried 75psi on one of my favorite descents - Longhorn. Coming down, I finally felt the fork was doing it as it should, it was pretty stinkin' sweet!

As you fall into a black hole, the gravity pulls with differing force depending on the end of you that is closer to its center. If you're falling feet 1st, the gravity pulls harder on your feet than it does on your head. The closer you get, the more drastic this effect becomes. So, the body part closest will travel faster than the rest of body, so you'll elongate & become thinner.

In the end, your body will fall victim to an effect called 'spaghettification' – your body eventually resembles a strand of sketti - because as you near the center, the effects of gravity increase.

This is what came to mind as I was descending Longhorn - the Pike wanted to go faster & faster, and handled everything w/ease. However; the rider & the lack of suspension on the rear could not keep up to the front end, so I felt as if I was being stretched by the effects of gravity. That was a good feeling.

I really noticed the increased stiffness of the tapered steerer & bigger legs on this ride. I had a few 'oh shit' moments where I thought I was about to lose it, but when I turned the bars to recover the front end responded very nicely & got back on track in an instant. After a few of those mishaps, I knew that I had slowed myself quite a bit cuz I almost came to a halt more than once. However, when I got home & looking at my times, it turns out that I had beaten those done on my old Sanction, a 160mm/150mm FS monstrosity!  It seems the Pikey was doing its job - my hands/wrists felt relaxed at the end of the downhill section.

After reading through an MTBR thread about the Pike, I figured that I must have received one lacking the proper oil/lubrication.

In between yardwork and other miscellaneous house duties, I dropped the lowers, re-filled oil and re-lubed the seals.  Now with 75psi, I was able to get full travel in the driveway. Pumped it back up to 95psi, and voila, a much 'buttery' feel than straight from the factory. Correct lubrication does wonders! If ya ain't getting the smoothness advertised, check your levels ASAP.

Looks like I need to start back at square 1 again to get it set up, so time to schralp those trails again.  Can't complain about that!