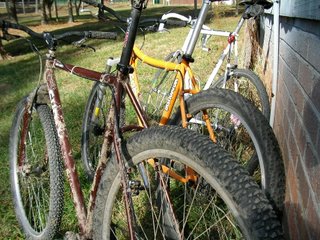 So, you win some & you lose some on E-Bay. I made out on some sales & buys so far. Didn't do so well on a few, such as a RaceFace DH ring. Sold for less than I paid at cost....ouch! Whatever, it's less baggage to haul.

Wow, lots of posts during the summer, eh? Had no 'haut-debit' line around, so it was e-mail only...and that was a pain in the ass at times. Now, let's get down to what went on from May 9 - Sept 25 with at little pain as possible to my typing finger & your reading eyes.

Here's a view of the grounds. That's the moulin just below, a 15th century building. I lived upstairs in the guesthouse. 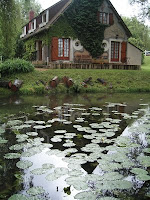 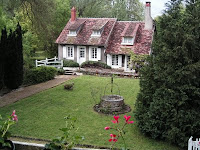 Ended up having a very cool bossman. Here's Steve lugging around some beverages at Jamie & Brooke's wedding that took place in August. 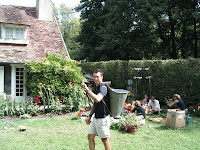 We had a pretty regular schedule for our clients during their stay: We would head to la Gare de Nevers Monday afternoon, as they would arrive at 14h29. After they got settled into their chambre, we would head out on a 10km introductory spin to vist l'Abbaye de Fontmorigny.

Tuesday was the highlight of the week. We would hop in the van & head to Herry, then unload the 2-wheelers & ride up to Sancerre, passing through some of the vineyards on the way. This was also the day where we heard the most complaining about the ride, as we went from 499' to 900' in 4km to reach the central square of town. But after reaching the 'summit', guests were pleased to find a very cool town & views of the surrounding area.

Wednesday was the market & chateau ride, passing by the market of Sancoins in the morning, then both Chateau de Bannegon & Chateau de Sagonne.

Thursdays were up in the air during the year. Started the year with a trip out to Donzy, then later in the summer it turned into an afternoon in the big city of Nevers & folllowed by a leisurely ride along the Canal Lateral a la Loire, with a stop at the Pont Canal de Guetin.

Fridays were a short roll to Apremont-sur-Allier with its marvelous garden, followed by a picnic along the banks of the river before heading back to the moulin. The evening we took the guests to Nevers or Bourges, where they could shop, dine...etc.

Saturdays led us to la Charite-sur-Loire. They had a little market, which we used to pick up supplies, before heading through the fields to Pouilly-sur-Loire to sample some of their wines.

I can't seem to add any more pix to this thingy, so I give up for now.

Anyway, that's summer in a nutshell, a very small nutshell at that.
Don't worry, or maybe you should, cuz there's more to come.
Posted by lubes17319 at 08:33 No comments:

So after a rain-out the day of the April 8th, we had the RainCheck in chAPEL hILL on the 23rd...immediately following the Apple Chill festival.

I rolled into town a few hours early to run the checkpoints a final time, and meet up with Chad at the People's Channel booth. Wow, there were a lot of folks at that thangy....& a lot of police presence as well.

A grand total of 6 wheelers showed to cruise the CHNC area. Chad set them off at 7:45 & I gave them an hour to answer 5 questions & arrive at the People's Channel for the 1/2 way stop. Jeremy wheeled in after only 25 minutes! He used to deliver pies in the area, so he knew exactly where to go sans map. As for the others, there was only 1 map amongst them. Colin brought one along, but had trouble reading it, and unwillingly handed it to Eric, who took off in possession. Thanks to their new-found wealth of knowledge, Eric & Niles rolled in together after about 40 minutes. Next to arrive were Colin & Davey another 10 minutes down the line. Colin stopped at a conbini to pick up another map to replace his loss. The hour-limit expired and still no sign of Chris. Gave him a ring & he was sorta close to our meeting spot. After a few more wrong turns, he showed. To compensate him for his DFL efforts in part 1, I gave him my area map for the next 1/2. All Qs answered correctly by all riders.

After a lil' breather, I handed out part 2, which returned us to the original spot after 5 more questions, and a horrid climb back into CHNC. Colin had the best idea: he blew off the hill, strolled into a pizza shop & grabbed a slice. This time, everyone, sans Colin, came in pretty much one after another. It was kinda difficult to get into certain areas of CHNC, cuz of the AfterChill going on - unofficial event following Apple Chill, wherein clowns cruise the streets in jacked-up, 20" wearing, bass-thumping P'sOS, causing trouble & sarging on big-booty hoes. Seems 3 people had got capped during the fun, so the man cordoned off a block as a crime scene, making access a tad tricky.

After the rolling section complete, we had a tie with vet Eric & 1st-timer Niles out front. So, following the foot-down, track stand & circles comps, points jumped a lil with.........

Eric taking home the $$$$. Thanks to yinz for showing up. Hope it was good!


PS - Had no idea what the hell an AppleChill was, or that it was even occurring the day I re-scheduled. Now I know & can better plan for next year's...that is, if the festival takes place. The local authorities are all talking about shutting it down due to increasing violence, so we may have an "AfterChill Riot AlleyCat" next year. We'll see....
Posted by lubes17319 at 09:03 No comments:

Yes, you heard it right! I have been taken on board as a bicycle tour guide in the sunny Loire Valley of France this summer. Now, let's go back to the beginning to get ourselves aligned.....

Once upon a time I had a full-time job, well, really several, but the most recent being in Tokushima, Japan. I decided to jump ship, or yacht as it was known to those in the know, & returned back home to the "good ole' USA". I had no future lined up, so my dad helped me out, & I ended up working with him most of the last year, doing construction in south NJ. 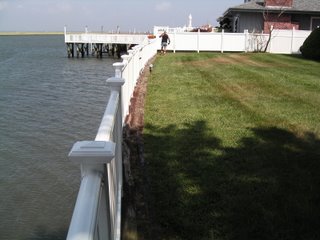 Here's a pic of one of the fences he installed, as well as the one in the background the year before. 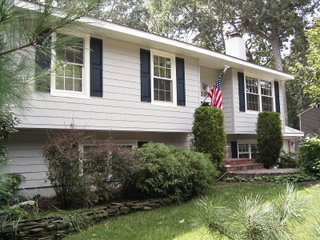 And a house we put new vinyl siding on. It had to be the hottest days of the summer when we were working there.


Moving along, I hooked up with ETS, the company that creates standardized tests for myriad purposes. if you've ever been through the US schooling system, you've probably taken one of their tests. My duties amount to being a scorewhore - I listen to audio responses from international candidates trying to get accepted to 'merican universities. I was doing this for a month or so when I got a note from Boomer: "Quit yer bitching & apply for this job!" with a link to a job posting - Le Vieux Moulin, a home-based bicycle touring center in France was in search of a French-speaking bike tour guide for the summer.

I was planning on trying to stick around the states & get myself grounded again, sending time with the fam, chasing the 'merican dream; however, biking, France, wine, cheese with pay....so, I haphazardly slapped together a resume & sent it off, expecting to be forgotten. Lo & behold, I get a note the next day from the owner asking for an interview. We chat for a while. I hear nothing for two days & decide to forget it, when I get another call from Steve, wanting to speak again b/c he had a few mo' questions for me. Excitement comes over me as I ring him back. Well, 1st question is "So, do you want the job?". Duuuhh, yeah!!

So y'all, I'm going back to France to 'work' from May 9-September 25 thanks to my bud Boomer. Props & kudos & thanks & all that mushy stuff.

I'm now making a list & checking it 15 times, and trying to study up on the area I'll be in so I don't look like a complete a@* when the 1st group arrives. Just blew a wad of money on an mp3 player so I can rock the funky beats over yonder.
Posted by lubes17319 at 11:29 No comments: